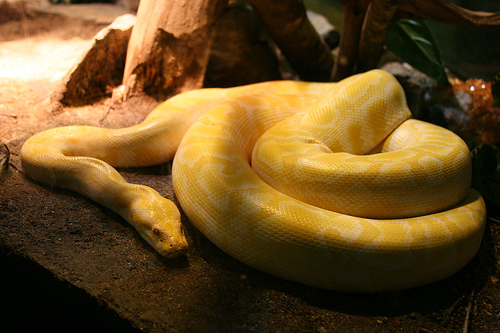 The Burmese python is one of the 6 largest snakes in the world. It is a constrictor snake, having no venom, it coils it’s body around the prey and squeezes until it suffocates. Wild individuals may reach up to 19 feet in length and weigh over 200 pounds. Female pythons will wrap their bodies around their eggs and by twitching their muscles they are able to raise their body temperature for incubation. Burmese pythons are captive bred for color variations with the albino form being the most popular. Unfortunately the burmese python has become an invasive species in the southern U.S.